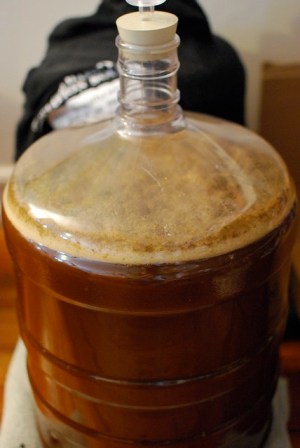 Compass Rose from Outer Banks Brewing Station, tasted at the World Beer Festival in Durham, NC in April of 2008 (original post).  This was a Belgian-style Brown Ale brewed with rosemary and was absolutely delicious.  Chris Cuzme and I wanted to make a beer to pour at our friends’ wedding and rosemary does stand for remembrance, so was the perfect excuse to brew this beer.

Pitched 2 Smack-packs™ of Wyeast 3522 – Belgian Ardennes™ yeast.  Fermented at room temperatures & not in my fermentation fridge – average of 68℉ with a range of 64℉ – 70℉

Kegged 3 gallons on 4‧8‧2012 with around 2/3 cup rosemary-infused vodka and served at our friends’ wedding that evening.

Very drinkable.  The rosemary-infused vodka added a very natural rosemary aroma and flavor.  The toastiness of the malts was a nice complement to the rosemary.  The malt sweetness is low and it has a light-medium to medium body.  Lovely session ale – balanced, flavorful yet very quaffable.

Chris and I were very happy with this beer and got a lot of compliments on it at the wedding (phew).  This is a terrific session beer to brew when you’d like something low ABV yet flavorful and/or when you have a time constraint.  We would definitely brew this again but we’d also like to make another version, bumping up the malt bill and therefore increasing both the malt complexity and ABV.  The yeast did not add much aroma or flavor which was perfect for this beer but we would reconsider pitching rate and yeast strain for a bigger version.  Adding infused vodka seemed like a cheat to me at first but it worked extremely well for this situation and added such a true rosemary aroma and flavor that I would definitely repeat it.  We’d also like to play with dry-hopping with the rosemary as well.  We’re probably going to do this with the remaining 2 gallons and bottle them – will add notes to this post if/when we do so. 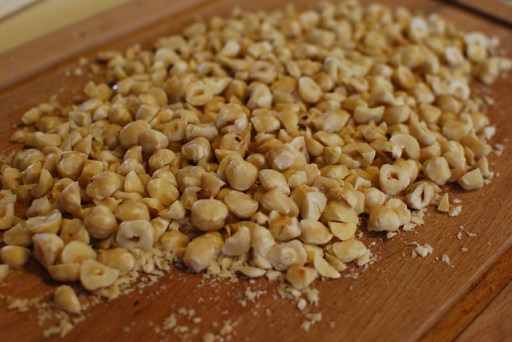 Fermentation Friday is a new weekly post about homebrewing, kombucha making, lacto-fermented foods, etc – anything & everything fermented is fair game. I’m launching with a beer that Chris Cuzme and I brewed recently, a Hazelnut Cream Ale.

My friend Clay Gordon, chocolate critic and author of Discover Chocolate, gave me some chocolate beans to smoke malt over.  Last summer (I can’t remember when – sometime after the first of July), I soaked them overnight, drained them, added them to my pile of charcoal and smoked 6 pounds of 2-row pale malt with them (more on my smoking technique here).  It was not at all like smoking with wood chips – the smoke didn’t last as long and didn’t seem as strong.  I really wasn’t sure how the malt would taste or what to do with it.  So the sack of malt sat and sat and sat.  Forward to February 2012 – Clay and Brooklyn Brewery Brewmaster Garrett Oliver are on Beer Sessions Radio together. Clay mentioned that he gave me the beans to smoke malt with and Garrett sounded intrigued/skeptical.  Just the inspiration I needed!  I had recently really enjoyed two beers brewed with nuts –  a Brazil Nut Brown Ale at 508 Gastrobrewery and Peter Kennedy’s homebrewed Pistachio Stout and was jonesing to brew something with nuts.  I’d gotten tips from both 508 owner/head brewer Anderson Sant’anna de Lima and Peter and was ready to try them out.  I initially was thinking of brewing a Chocolate Hazelnut Porter.  Then Cuzme suggested a Hazelnut Cream Ale instead – a light, creamy beer to show off the smoked chocolate and hazelnuts.  Brilliant.

Kegged on 3‧21‧2012 with approximately 1/2 tsp of Bakto Flavors hazelnut extract and served at a friends’ wedding on March 22.

The final gravity sample was nicely smoky, with a hint of chocolate but not much hazelnut.  The carbonated beer was much lighter – very clean and creamy with only a touch of smoke and a hint of hazelnut. It was a very refreshing, drinkable ale and the 3-gallon keg kicked quickly.

This is definitely a beer I’ll brew again – next time bumping up the amount of hazelnuts in the boil, boiling longer and adding more extract depending on how much aroma & flavor we get from increasing the nuts.  Oh, and remember the sugar next time (jeez). I have 3.25 lbs of the smoked malt left and will either make another Hazelnut Cream Ale or possible a Chocolate Cream Ale with the remainder.  Perhaps with some cocoa powder & pale chocolate malt – just enough to give a hint of chocolate….