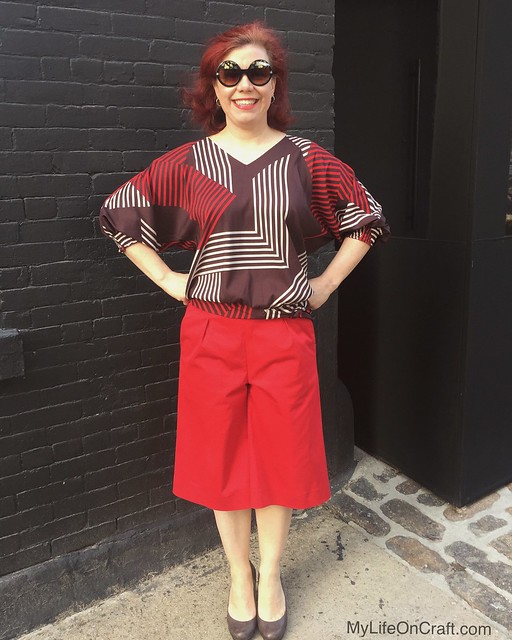 Well-written pattern, fast and easy assembly, versatile style, fits me like a dream.

Woohoo – I’m back to sewing and finished my first pair of pants!! A bit of background first… I learned to sew at an early age (somewhere between 5 and 10) and have sewn on and off my entire life. I got into garment sewing more seriously when I first moved to NYC in 2003 and made a few garments, including some basic skirts, shirts and bags. I started homebrewing in 2006 and that completely supplanted sewing as my main hobby. I’ve dabbled in sewing since then, a few zippered bags, a holiday stocking, but nothing substantial. Fast forward to 2016 (where have the years gone?). I’ve written a homebrewing book and while I still brew pretty regularly, they’re all the quick and easy beverages that I wrote about. I’m only brewing beer on a commercial scale with my husband at this point and I’m craving crafting again. So I signed up for the Try Something New Every Month project and started working my way through various crafts. I wasn’t really considering any sewing projects until my friend Annika set up a private sewing class with Cal Patch for a group of us (you can read about it in last year’s TSNEM recap, scroll down to August). I was hooked. I purchased another simple pattern online (the Twist-It Blouse), whipped that up, started a fabric necklace and then stalled out. I got obsessed with embroidery, pin loom weaving, knitting tiny animals and needle felting ornaments for the rest of the year.

I started 2017 with two daily challenges, one embroidered and the other knit. I’ve continued with the Temperature Scarf (updated coming soon) but gave up daily stitching in late January. I became obsessed with mending (still stitching but not daily) and taught a few mending workshops here in NYC. I’m going to continue mending but I really want 2017 to be the year of clothing, and more specifically, deliberate fashion. I want to think more about what I’m wearing, what I want to wear and have more appreciation for textiles. Residents of NYC throw away more than 200,000 tons of textiles every year! Whoa, that’s a lot of landfill space. And while I try to donate my unwanted clothing to charity, I know that some of that eventually ends up discarded. Sigh.

I tend to be pretty eclectic in my personal style – I’m attracted to a variety of colors, fashions, cuts, decades, etc. I’m basically all over the map, style-wise. And while I have definitely found some styles, cuts and colors that work better for me, I’m still not thinking much about my overall wardrobe. I am a huge sucker for bargain shopping, from clearance racks to sample sales and everything in between, and I often pick things up because they’re cheap and easy and not because I need them and/or they work well for me. I also don’t really enjoy shopping for clothing anymore. There’s too much out there (especially here in NYC) and I find it difficult to make the right choices (for the reasons stated above). And, while I have a great job, I’m the only income right now and might be for a while. My husband is opening a brewery in LIC and while I’m super excited and completely invested, I know that it takes some time to get a new business off the ground. So I’m trying to save some money and not make impulse buys, most of which I haven’t really needed in the past anyway. This sounds silly but the easiest way I’ve found to cut down on unnecessary buying is to not go shopping. So I’ve been fighting the temptation to stop in stores in between appointments or on my way home (I walk by so many cute boutiques and shops every day). And it’s working – I haven’t bought a piece of new clothing for months. I did pick up a couple of lovely used cashmere sweaters at a charity shop a few months ago and some socks at a sample sale but other than that, nothing. I’m wearing what I already have and feeling pretty good about it.

Next steps – be more thoughtful in my clothing choices and spend some time planning my wardrobe. I’ve sorted through my to-be-refashioned or tailored box and organized it to tackle piece-by-piece. And I’ve started sewing again. One gap in my wardrobe is pants. I wear mostly dresses for work at this point (fleece tights changed my life a few years ago). I gained almost 20 lbs while working on the book and dresses, especially knit dresses, are much more accommodating to weight change. I got serious last year and dropped all of the extra weight through diet and lifestyle changes so I’m back to my normal adult weight. Granted, I fluctuate a bit, but I’m pretty stable at this point and ready to bring pants into my work wardrobe again. Especially if I can get some casual wear out of them as well. When Megan Nielsen came out with the Flint pants pattern last month, I knew that these were the culottes for me. I had purchased the Colette Clover and the Itch to Stich Emily Culottes patterns when they were on sale late last year but I have zipper anxiety – I haven’t sewn a zipper in a long time. I know they’re not difficult but yet, they make me nervous. So, the Flint culottes came through my inbox, were on sale for subscribers and they were zipper-free! And so cute.

Fabric: red stretch cotton sateen from my 10+ year-old stash (probably purchased at Chic Fabrics as that was always my go-to for cottons)

Version & Size: I cut Version 1 in a small, no grading as my measurements matched up.

Modifications: I made a few simple mods. First, I wanted the length to be somewhere between the two lengths in the pattern. I ended up cutting the fabric 8.25″ shorter than the longer length. I basted everything together to check the fit first and decided that the crotch was a bit too long for my body and that I wanted a bit less width in the legs. The sateen is a heavier fabric and was pretty bulky in the pattern width. I ended up stitching a wider seam allowance on the seam that runs from the bottom of one leg to the other, around 1″ at the crotch seam and grading out to around 1.5″ at the hem. I thought I had written this down, but nope, totally didn’t. I must get better at note-taking during sewing.

After trying out an overcast foot to finish the edges of the pockets, I broke down and got my serger down from our storage loft. Yes, it took some time to rethread, adjust and figure out how to use it again but totally worth it in the end. It is so much faster and all of my seams are finished neatly. I used a fusible knit interfacing for the waistband. I’m not sure if this was the right thing but I wanted to maintain the stretchiness of the fabric and build in some give and it worked. I used clips more than I used pins – I bought these on Amazon last year and they work beautifully. They came with some large clips which I couldn’t imagine using but they were perfect for use on the waistband.  I tried out the Clover Hot Ruler that I picked up recently and love it – makes it so easy to accurately turn up edges. I used the very clever dart method that Pamela Leggett teaches in her Craftsy Class, Fashion Sewing & Serging Techniques. I used a hidden button and hook closure, which was suggested in the pattern. I finished by serging the bottom hems, then fusing them with 1/2″ fusible tape and blind stitching a 2″ hem. I used a generic edge-stitching foot (#5) that I bought off of ebay to edge-stitch the waistband and do the blind hem and it worked really well for both. I was nervous about generic feet for my Bernina machine but I am loving them so far.

I love this pattern! It was fast, easy and fits really, really well. It’s very versatile as the length can go from shorts to full-length pants and the width of the legs can be adjusted quite a bit. The pockets are quite generous, though the left pocket is only partial as that is how you get in & out of the pants. I printed the paper pattern at home and it was easy to match up the pieces and tape together. The instructions were great, with clear illustrations and many tips included. I think that this pattern is suitable for a beginner but would also be satisfying for more skilled sewers. I can see myself making these even after I get over my zipper angst.

Wardrobe: these pants work with at least 5 of my current blouses plus a couple of t-shirts and a turtleneck. They look great with heels but work with flats as well. Work appropriate but comfortable and casual enough for nights & weekends – can be dressed up & down. A nice addition to my wardrobe.

Shortcomings: I need to take notes while sewing and work on my blind hem stitch.

Next Steps: I picked up some metallic grey stretch denim at Chic Fabrics for $2.99/yd that I think will work as a full length Flint, though I will likely narrow the legs a bit. I also have some railroad denim in my stash that would be super cute for this pattern, too – length & width TBD. Basic black and brown pairs would be nice somewhere down the line.

Next project: a (hopefully wearable) muslin of the Sewaholic Belcarra top, in a green gauze that I picked up at Chic for 99¢/yd. I have several lovely silk fabrics in my stash and I would love some spring/summer blouses to go with the skirts that I own. I’ve only sewn with silk once and am excited (& a wee bit scared) to tackle it again.