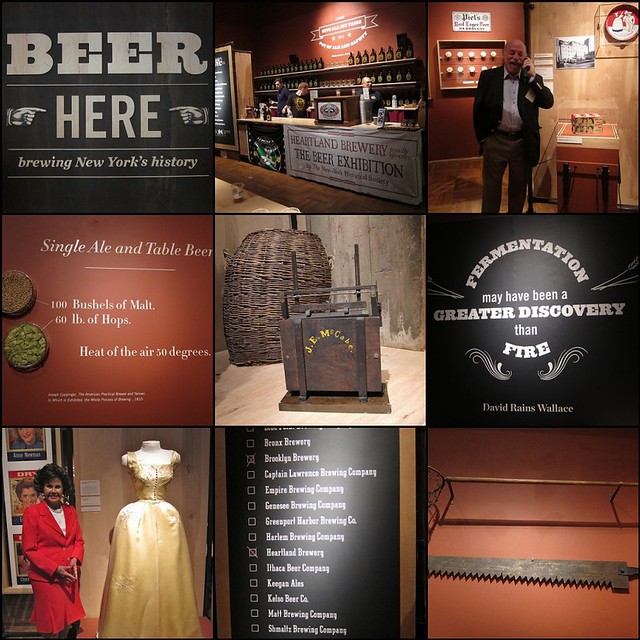 I was fortunate to be invited to a press preview for the Beer Here: Brewing New York’s History exhibition that opens at the New-York Historical Society tomorrow. I’ve been excitedly awaiting the opening – New York City has an incredibly rich brewing history and I was curious to see how the Historical Society would present it. Wow – I was not disappointed.The exhibit is laid out over eight themed rooms and covers a wide scope of information, from the New York hop industry to ice harvesting on the Hudson to the Temperance movement. The variety of objects on display was impressive. I particularly loved the recipe books, ice harvesting equipment and 1886 hop press. The last room before you reach the Beer Hall is devoted to NY City breweries in the 1900s and chock full of breweriana, including a coronation gown and ephemera loaned by Miss Rheingold 1956, Hillie Merritt Mahoney (check out the lower left pic in the mosaic above for a photo of this truly charming lady). The exhibition ends in a beer hall featuring New York state beers (beer hall hours are below). When the beer hall is open, exhbition attendees can purchase a beer for $8, a Sigmund pretzel for $4 or beer/pretzel combo for $10. There will be 2-5 different beers available at any given time and will rotate. There is also a series of Brewery tastings as part of the exhibit. Tickets are $35 (or a six different tasting package for $150) and include an educational tasting hosted by someone from the featured brewery (schedule below). There is also a Beer Appreciation Night on Tuesday, July 10 at 6:30 pm featuring the curators of the exhibit, Brewmaster Garrett Oliver & Co-Founder Steve Hindy of Brooklyn Brewery and Gabrielle Langholtz of Edible Brooklyn and Manhattan. A tasting of Brooklyn Brewery beers will follow. Tickets for the program are $24 or a combo ticket for the program and tasting is $49. Admission to the Beer Here exhibition is included in the purchase of a general admission ticket to the New-York Historical Society – $15 for Adults, $12 for Seniors and Educators or $10 for Students. The Historical Society is pay-as-you-wish on Friday evenings from 6-8 pm. I’m already planning a trip back to the exhibit so I can see it at a more leisurely pace (I had to rush off to a video editing class last night after the preview). And also to purchase some swag – the exhibition t-shirts are sweet. This is a highly informative and entertaining exhibition and a must-see for every beer geek within driving/train distance of the city.

The exhibition is sponsored by Crown Holdings (inventor of the bottle cap in 1892!), Brooklyn Brewery and Heartland Brewery.