The week in NYC beer events – my picks

The week in NYC beer events – my picks

What are you looking forward to this week? 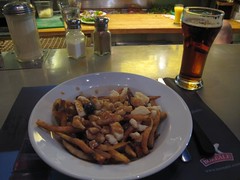 I adore poutine and was ready for the real thing after a lengthy day of travel.  Luckily, we’re staying a few doors down from the closet-sized Patati Patata, a restaurant highly recommended by Montreal Poutine.  I took a seat at the counter and ordered the Poutines Classique and a 10 oz pour of Boréale Rousse.  The poutine was delicious – the perfect meld of frites, creamy gravy and firm cheese curds.  The beer washed my palette clean nicely between bites.  Our hunger satisfied, we headed north to Dieu de Ciel.  There was a Japanese beer event scheduled for that night and the place was packed.  We fought our way to the bar and ordered beers.  I went with the Ochamena Bi-Ru while Tom chose the Chaman, both brewed by Dieu de Ciel.  The Ochamena was quite tasty though I could not discern what made it so.  It was listed as Ochamena au Sarrazin et Thés Japonais, which turns out to be buckwheat and Japonese tea.  Very interesting flavor qualities – I’d like to try it again with a fresher palette.  Tom’s Imperial Pale Ale was also very drinkable.  We grew tired of being jostled by the crowd and headed back towards our lodging.  We decided to duck into Reservoir, a brewpub around the corner from our apartment.  Tom enjoyed the IPA while I ordered a small Blanche.  The Blanche reaked of sulfur which impaired the drinking experience greatly.  I ordered a small cream ale next while Tom had a stout – both were served on nitrogen.  The stout was the best of the bunch in our opinion.  We headed to bed after that.  Mondial next and a return visit to Dieu de Ciel… 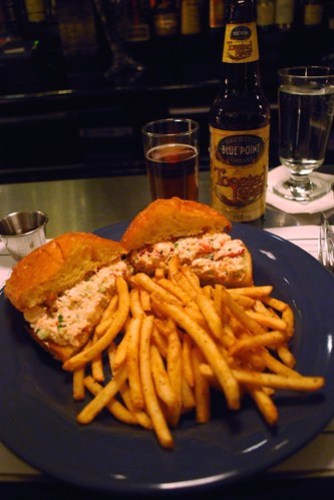 When the e-mail announcing The Mermaid Inn’s new Blue Plate Special appeared in my inbox on Monday, I took notice. A lobster sandwich, fries and a bottle of Blue Point Toasted Lager for $20? Count me in. I’ve enjoyed several meals at Mermaid Inn in the past and found the food delicious, the atmosphere charming, and the service excellent. So Wednesday evening I met my friend and fellow degustation advisor, Chris Cuzme, at the East Village location. I had made reservations but we opted to eat at the bar instead. The bartender was attentive and our orders were quickly taken. Tasty crackers are provided to take the edge off of your appetite and the beer bottle is served very cold with a small water glass to drink out of. Blue Point’s Toasted Lager is a clean beer with a subtle toasted maltiness and enough hops to balance but not distract. I consider it a great food beer as it pairs nicely with almost anything. Mermaid’s lobster sandwich is no exception. The lobster salad is on a brioche roll instead of the traditional bun and is served with fries seasoned with Old Bay.  This is a tasty combination – the sweetness of the lobster salad melding nicely with the buttery bun and contrasting with the spiced saltiness of the fries.  And it washes down nicely with a swallow of the Blue Point.  In lieu of a dessert menu, a small pot of chocolate pudding is provided at the end of your meal along with a Fortune Teller Fish, a novelty that I remember fondly from childhood.  This was a delightful meal.

What you need to know:  The Blue Plate Special is available from 5:30-7 pm daily and sounds like it will change monthly.  The restaurant filled quickly around 6 pm – I recommend making a reservation on OpenTable just in case.  You can always choose to sit at the bar if there is room.  The special is available at both locations – the original in the East Village and the newer on the Upper West Side.  How good of a deal is it?  The sandwich normally costs $26 and I’m guessing the beer runs $5 or 6 (I forgot to check), so this is a heck of a bargain.  I’ll be returning several times before the end of the month and I recommend you do the same.

is craft beer and food pairings. Chris Cuzme and I formed the New York City Degustation Advisory Team about a year ago. The NYCDAT is dedicated to the promotion and appreciation of craft beer through delectable food pairings. We’ve been hosting monthly beer and food pairings at Jimmy’s No. 43 in the East Village of Manhattan for over a year. We recently doubled the number of pairings in response to high demand (we had sold out the previous 5 months weeks ahead of each event) and have branched out into private and corporate pairing events. We generally do 5-6 pairings per session, most commonly consisting of beer, cheese and chocolate. Tonight are our first April sessions and we are featuring Rick’s Picks, cheese from Saxelby Cheesemongers, sausage and beer. Chris and I always hold at least one pre-tasting to conceive of and plan the pairings, here are two pictures from last night’s session: 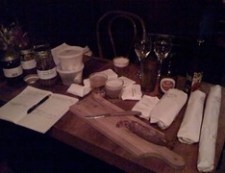 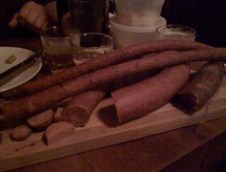 My mouth is watering already. More pictures coming soon, for further information about our events, please visit our website. I’m off to Jimmy’s…

Jimmy’s No. 43 presented a bacon, beer & pickles tasting last night. Bacon and beer, mmmmm, how could I resist? Food writer Josh Ozersky aka Mr. Cutlets hosted, along with Jeff from Sixpoint Craft Ales and the Rick’s Picks folk. Six different bacons and five Sixpoint Ales were available, including the delightful “black market” porter on cask. We started with Oscar Meyer bacon and the Brownstone brown ale. Eh, not bad. Next up was Dines Farm smoked bacon. I found that this bacon completely overpowered the Brownstone, but worked pretty darn well with the Righteous Rye. The match amplified the salty-smokiness of the bacon and brought out the spicy character of the rye beer. High Hope Hogs wood-smoked bacon was paired with the Otis oatmeal stout on nitro.

The High Hope is a balanced bacon, but lacks smokiness due to the low fat:meat ratio. Josh explained that the fat in meat acts as a flavor amplifier for smoke, etc. The bacon has a nice “porky character”, though. The Otis was pretty stirred up, with quite a bit of yeast cloudiness and I didn’t get much from the pairing. Violet Hill’s bacon was passed around next. This is made from the butt, or shoulder, of the pig. It was very salty, with substantial texture (a bit chewy, really), and had more of a ham-like flavor. I found that this worked very well with the Brownstone, enhancing the porkiness of the bacon and really bringing out the maltiness of the beer. Flying Pigs Farm’s bacon was next, a belly bacon. Flying Pigs is one of the top butchers in America according to Josh. It’s a very balanced bacon. I tried it with the porter, which is made with carob. The bacon brought out the chocolate goodness of the beer, but the beer overpowered the bacon. Last was freshly-smoked bacon from RUB BBQ. Their bacon is thick-cut Berkshire pork bellies, aged for ~7 days, cold-smoked twice, and hot-smoked once (with the traditional hickory, which is the signature flavor of bacon according to Josh). This bacon has lots of fat and lots of flavor. It paired pretty nicely with the Bengali Tiger. A bite of bacon, ohhhh, hickory-smoked goodness; a sip of Bengali washed the smoke away and woke up my tongue with its intense bright citrus. Wait, where’s the bacon? Ah, there it is, back after the swallow. An interesting pairing. I snacked on some Rick’s Picks as well. These deserve beer pairings all on their own – with a bit of creamy cheese (fresh goat, maybe?) I bet some marvelous flavor combos would arise. Another night, maybe. Jimmy’s puts on regular food & beer pairing events. The next is this Wednesday, the 25th, hosted by Chris Cuzme and Anne Saxelby of Saxelby Cheesemongers. Chris and I will be hosting an evening of beer, ice cream/sorbet, and fruit pairings on August 1 (who doesn’t love a good beer float?). Should be fun.