Picks of the week will be up Tuesday, May 17

My apologies but I’ll be a day late this week.  Please check back tomorrow for the schedule!

Brewers for Brewers fundraiser for Japan

Several local brewers and restaurants have joined together to hold Brewers for Brewers, a Japan Disaster Relief Benefit, at the Brooklyn Brewery on Monday 28 from 7-10 pm.  I bought my ticket last night and I encourage you to do the same, sooner than later as I’m guessing this will sell out.  Jimmy Carbone recently posted a letter from Toshiyuki Kiuchi of Kiuchi Brewery that discusses the devastation caused by the recent tsunami on Japan’s brewers.  Get your tickets here and drink for a good cause! 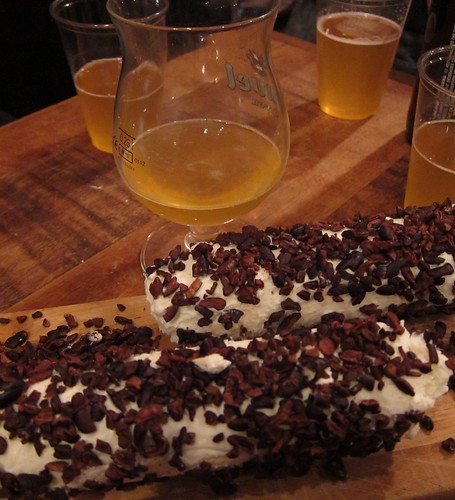 Last night’s chocolate & beer extravaganza was a ton of fun!  Here’s the menu: 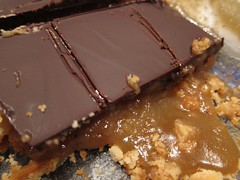 Although everyone enjoyed the shortbread bars last night, they are very messy as the caramel layer never sets properly.  I like the gooey-ness and plan to make these in a silicone mini muffin pan next time, spreading the shortbread up the walls, placing the caramel in the center and sealing the whole thing with chocolate.  They should be much easier to handle.  Cheers! 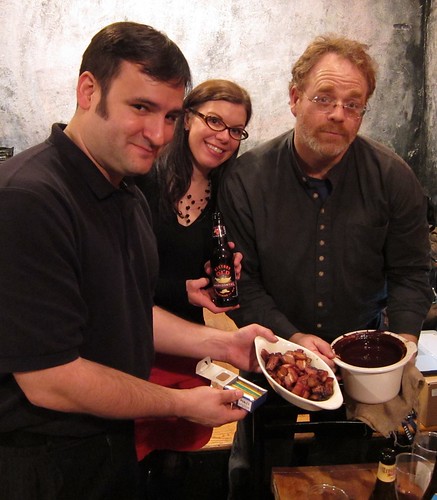 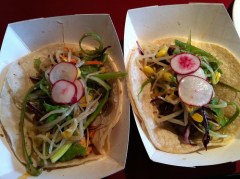 D & I headed to Williamsburg for the cask festival at dba this afternoon.  We needed to fill our bellies first and headed to dokebi for Korean tacos.  While the brunch items sounded terrific, (Hot Stone Pork & Grits and Kimchee Fried Rice Omelet both got our attention) we were there for the tacos.  dokebi offers seven different tacos – I chose the Short Rib and the Spicy Chicken.  Both were tasty but the Short Rib won.  D also enjoyed the Seaweed soup and we split the pickled jalapenos and Kirby kimchee sides.  Tacos were $4 each and the perfect pre-cask fest treat.

This weekend was the 4th cask festival at dba Brooklyn.  I wasn’t able to attend the last one and was really looking forward to catching up with friends and drinking some fine real ale today.  Alex Hall, NYC’s cask ale king and cask cellar manager at dba, brought in sixteen casks for the festival (the full list can be viewed here and here).  I was able to try nine of them (thanks, friends) and my favorite by far was the Barrier Cairn Scottish Ale.  Granted, I’m rather obsessed with smoke beers at the moment, but this was a well-made beer and the cask conditioning only enhanced the fine aromas and flavors.  I’ve been impressed with every Barrier beer that I’ve tasted so far.  Evan Klein, owner and brewmaster, is doing a bang-up job out in Oceanside.  If you’re drinking in NYC or on Long Island, give Barrier a try – you won’t be disappointed.  I was happy to see that the cask fest was well-attended – so well attended that there might not be any casks left on Sunday!  If you missed this one, dba Brooklyn has three casks pouring at all times. 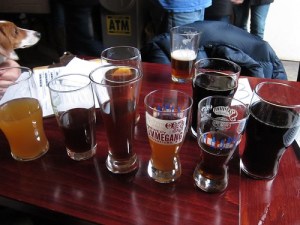 The next area cask festival will be 2nd Annual Nano Long Island Cask Festival in Rocky Point on January 29.  Mike Voight of Rocky Point Artisan Brewers, expects between 8 and 10 casks to be pouring from Rocky Point, Barrier, Blind Bat, Barrage and Port Jeff Brewing.  Tickets are $40 – call DEKS to reserve a spot at (631) 821-0066.

Thrilled on a Sunday evening

Passed by the Gate on my walk home and decided to check out the draft list. Boy, am I glad I did, because I’m now enjoying a 2006 Cantillon Grand Cru on draft. What a beautiful beer and the perfect lift for the Sunday-night-back-to-work-blues.

I’m starting my Friday night enjoying a Brooklyn Oktoberfest at Shady McGrady’s in Harrisburg, Pennsylvania. Buy a pint, get a free glass! Four free glasses are on offer tonight: Three Philosophers, Tommyknocker, Bells & Brooklyn. Free glass night is every Friday, check it out if you’re in HBG. Shady’s offers 24 taps & over 150 different bottles, which include a heck of a lot of great craft brews. I’ll be back for a bomber of Port Brewing’s 2nd Anniversary later. Cheers!

Cask on now at Iron Hill Brewery in Lancaster, PA 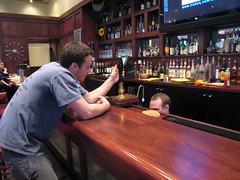 I was fortunate to catch the installation of a new cask engine at Iron Hill Brewery in Lancaster yesterday. We stopped in for a beer (or a sampler of 10 as it were) and head brewer Paul Rutherford and assistant brewer Ryan Wibby expertly placed the real ale dispenser as we watched.
A pint of Russian Imperial Stout was poured and proclaimed quite tasty. Our enthusiasm must have shown (we were taking a lot of photos) and we were lucky enough to be recipients of that pint. Three cheers for one more cask engine in Pennsylvania! 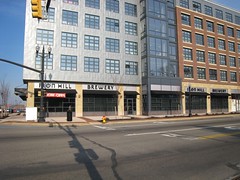 This was my second visit to the newest Iron Hill and I was even more impressed this time than the last. Our first visit was on Superbowl (“the big game”) Sunday and they were a bit short on beer. The bartender said that he had poured at least 30 growlers already and it was only 3 in the afternoon! It is wonderful to see such local support for a brewpub. And what a brewpub; it’s a beautiful building with lots of dark wood paneling & tables, blonde wood floors,and funky sound-absorbing ceilings that give the whole place a modern mission feel, upscale yet still very comfortable. 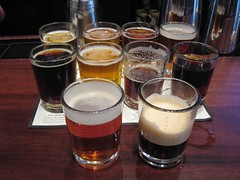 And the beers are great. My ten beer sampler ($7) contained the five standards: Iron Hill Light Lager, Raspberry Wheat, Vienna Red Lager, Ironbound Ale, and Pig Iron Porter, plus the Belgian seasonal, a tripel, and four seasonals, the American Brown Ale, Munich Dunkel, Irish Red, and Indulgence Chocolate Stout, the latter two poured on nitro. All were quite drinkable (yeah, even the light), with most being in the excellent category. 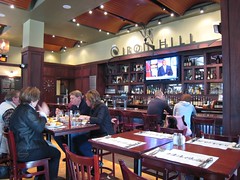 The American Brown, Munich Dunkel, and Tripel were my favorites. The Indulgence was quite nice, a little light but with a significant chocolate character, as expected being brewed with five pounds of Venezuelan chocolate nibs.

The Russian Imperial Stout on cask, was excellent, although I’ll admit my palate was a bit blown at this point. No food this time as we’d eaten earlier, but I loved the Pesto Chicken and Artichoke pizza I had on my first visit. All of the employees are well-trained and very friendly, the server who explained my sampler had taken part in Iron Hill’s brew-for-a-day program and was very enthusiastic and proud of all of the beer. The Iron Hill Brewery of Lancaster is highly recommended, a comfortable environment with delicious beer & food, what more could you ask for? Go, please.

Whole Foods stepping up in Manhattan

I stopped into the new Whole Foods Bowery last night after the tasting to pick up a few bottles of the Schneider-Brooklyner Hopfen Weisse. I was told by a very reliable source that Whole Foods will be opening a craft beer store at this location. Located on the corner of Houston and Chrystie, the store will feature six local taps (with at least one being Sixpoint) for growler fills and an extensive bottle list. Cross your fingers for a late August opening.