I started homebrewing again last June after a two-year hiatus.  I was lucky to inherit a friend’s brewing equipment (thanks, Bill!) and I’m fortunate to have a shared backyard and basement and awesome neighbors here in Brooklyn.  I’m attracted to homebrewing for a few reasons – it’s a lot of fun, it lets me use some of the science I learned back in undergrad & grad school and I can make weird/unusual/challenging beers.  Brewing is really a wonderful combination of science and creativity.  I truly love all beer – there’s nothing like a crisp pilsner in the summer or a lush coffee porter in the winter but I’m most excited by the weird.  All those crazy Short’s beers, that Mamma Mia pizza beer, and pretty much any beer made with basil or lavender (the Bruery’s Trade Winds and Empire’s White Aphro come to mind).  And then there’s the sours and the smokes – my two favorite styles right now.  So that’s mostly what I brew.  I’m fascinated with the wild bugs and unusual styles – and smoke, I’m all about the smoke right now.  I’m going to try and include my homebrewing adventures more often on the blog but here’s a snapshot of my cellar on May 22, 2011 to get started: 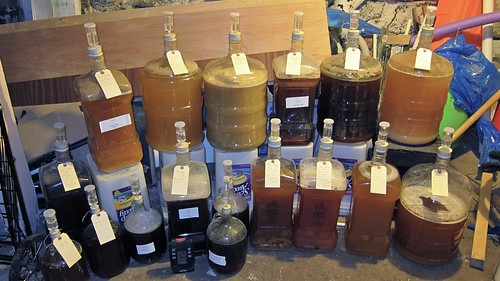 Back row, left to right: 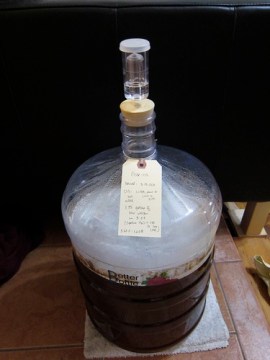 So, that’s it for right now.  I’m a pretty lasse faire brewer but I’m having a lot of fun and making some very tasty beers.  I’m off to LA tonight to sail around Catalina Island for three days aboard the Resolute.  Then to San Diego for NHC – I’m so excited!!!!  I’m going to try to blog from there but am not sure how much time (& motivation depending on how much beer I drink).  More when I return for sure.  Cheers!