Skip to content
Home > Fermentation > Let’s Get Smoked!
Published May 6, 2011 by Mary

I’m obsessed with smoked beers.  Rauchbiers, lichtenhainers, Grodziskies, smoked porters, smoked lagers – I rarely meet a smoky beer that I don’t like.  So I began buying every one that I could get my hands on.  And planning a tasting.  And brewing my own smoked beers.  But I really wanted to combine the two.  Then I read about the BJCP’s Continuing Education Program.  And being 2.8 experience points from a National level judge, I knew that I had to organize a Special BREW session on smoked beer.  The New York City Homebrewers Guild gave me the green light and my proposal was accepted by the BJCP.  Last Sunday, May 1st, the NYCHG held their first BJCP Continuing Education Workshop, Let’s Get Smoked!

We started the day by reviewing the BJCP style guidelines and judging three commercial examples: Helles Schlenkerla Lagerbier, Left Hand Fade to Black Smoked Baltic Porter and Aecht Schlenkerla Rauchbier.  I know, the Helles was a bit of a cheat since it doesn’t contain smoked malt but I wanted a lighter beer to add to the mix and couldn’t get my hands on enough bottles of anything else.  And it is an excellent beer and inspired a lively discussion.  Guild President Chris Cuzme led a judging discussion after each beer.  After judging, we talked about the history of smoked beers and tasted some smoked “teas”, prepared with the three different commercial malts available to homebrewers.  I used the sampling technique discussed in Smoked Beers:  History, Brewing Techniques, Recipes by Geoff Larson and Ray Daniels, which was a fabulous reference for the entire day.  I added one cup of smoked malt to two cups of 140° F water.  I soaked for ten minutes, stirred, cooled to room temperature, then strained off.  We used Briess cherry wood, Weyermann beech wood and Simpsons peat smoked 2-row malt in our samples. 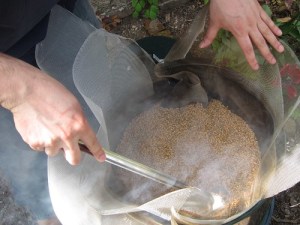 Next up, smoking our own malt.  I’ve been wanting to smoke some malt for awhile and this was the perfect opportunity.  We used a hybrid method based on those described in the Smoked Beers book, using wet wood chips and dry malt.  I’d soaked a pound of hickory malt and purchased five pounds of pale malts for the first batch.  We outfitted the smoker with a layer of aluminum screening on top of the water pan to use as a filter and we put the malt in two layers of aluminum screening set on top of the grill.  Ray & Geoff recommend stainless or copper screening but I had no luck finding either so we went with what was available.  We sprayed the malt down with distilled water as it was poured in, popped the lid on and let her smoke.  It was a little more awkward than that – tons of smoke and an aborted attempt to line the screening with wet cheesecloth, but overall, it went pretty well.  Once that was going,  we talked about historical smoked styles, primarily lichtenhainers and Grodziskies, using Randy Mosher’s Radical Brewing (Stan Hieronymous’ Brewing with Wheat is another excellent reference) and finally broke out the food and beers for tasting.

And what a smorgasbord!  Moxey made baked beans, Vlad smoked a bunch of salmon on his home smoker, Danielle & Benjamin made pork belly, I made smoked mac ‘n cheese and people brought kielbasa, sausage, smoked cheese and lots of sides.  Kevin poured a growler of his homebrewed smoked porter and we started cracking open bottles.  We tasted seventeen more commercial examples in all and it was a pretty eye-opening experience.  Everyone had their favorites, but my standouts were the Captain Lawrence Smoke From the Oak Rum Barrels, the Schlenkerlas, Mikkeller Rauch Geek Breakfast and the HaandBryggeriet Smoke without Fire.  Lots and lots of inspiration for future home brews, as the tasting was intended.

We also smoked five pounds of wheat malt over apple wood chips, using the same method as the pale malt, although I only soaked 8 ounces of the apple chips.  We stirred a few times and re-sprayed the malt – we didn’t time closely, but the pale malt smoked for probably thirty minutes or so and the wheat for about 20.  OK – I just talked to Cuzme and those numbers are probably not accurate at all.  We initially smoked for 10 minutes, tasted, then smoked for a bit more – it’s going to vary due to temperature, amount and type of wood chips, and amount of malt regardless.  Once we removed the malt from the smoker, we let it dry out a bit then split it up, bagged it and gave everyone some to take home.  I’m looking forward to lots of  smoked homebrews at future guild meetings!  Note:  the malt is much more aggressive in the baggy than it seemed coming off the smoker.  I’m really looking forward to brewing with it but it’s going to take some experimentation and practice to get any control over the smokiness.  We finished the beers and everyone ambled home (very thankful of public transportation).  Cuzme stayed and we brewed a smoked beer for NHC – who can resist boiling in the dark?  It was really a fantastic day – I think everyone learned about smoked beers and had a lot of fun doing so.  A special thanks to Dennis for providing some of the beer and taking wonderful pictures – the full set can be viewed here – and to everyone for their participation.  I’m already looking forward to the next continuing ed session! 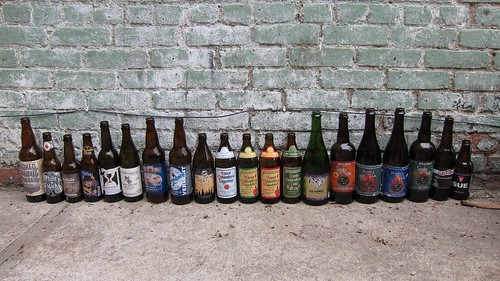