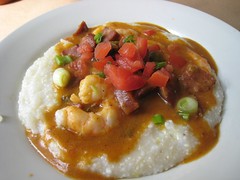 We started the day off right with a wonderful breakfast at Early Girl Eatery. JB and I both had the shrimp ‘n grits, nicely smoky with chorizo and gravy, with a pancake on the side, served with organic maple syrup. Although I didn’t have beer with my breakfast, Early Girl offers several local beers, Pisgah Porter and French Broad Pilsner on draft and Highland Gaelic Ale in the bottle. I shopped the local galleries for the rest of the morning and into the afternoon, Asheville has some stupendous local artists and craftspersons. I recommend the Woolworth Walk market in the former Woolworth Building on Haywood St for one-stop shopping as it hosts a number of artists and craftspersons with a wide range of media and prices. 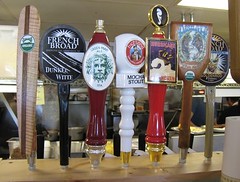 We had a late lunch at 12 Bones Smokehouse in the River Arts District of Asheville. 12 Bones features seven local taps, Green Man IPA, French Broad Goldenrod Pilsner and Dunkel Witte, Pisgah Organic Pale Ale and Summer Ale, Foothills Hurricane Heifeweizen and Highland Mocha Stout, 10 oz for $2 or 20 oz for $3.75, displayed on a chalkboard above the counter. I chose a small pour of the Pisgah Summer as I hadn’t had it yet and ordered a plate of six ribs, half with chipotle blueberry and half with spiced apple-habanero, green beans & jalapeno cheese grits for sides. Everything was ridiculously delicious, including JB’s pulled chicken and smoked turkey, collard greens, and corn pudding and the cornbread that comes with every

plate. 12 Bones offers a variety of sauces to choose from, including vinegar, sweet tomato, jalapeno, and a rotating number of fruit based sauces. It’s a casual joint, with concrete floors, wood tables & chairs, and shed-like outdoor seating. They’re only open from 11 am – 4 pm every day, this is a must for any craft beer and barbecue lover visiting Asheville. 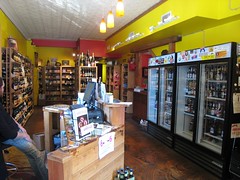 We stopped by Bruisin’ Ales on the way back to the hotel. Bruisin’ Ales is a fantastic craft beer shop conveniently located in downtown Asheville. I picked up several Pisgah bombers and a few other things. Bruisin’ Ales has an impressive selection of American crafts and imports and is the place to stock up on local craft bottles in Asheville. They also host and coordinate beer events in the area, including some fantastic-sounding beer dinners.

After freshening up, JB and I headed down to the bar in the Chophouse restaurant located in our hotel, the downtown Four Points by Sheraton. The Four Points by Sheraton chain has a “Best Brews” program developed with the assistance of the Brewers Association. Each hotel that participates in the program offers at least four drafts and up to twenty bottles, focusing on American crafts and imports. The beer list is categorized by style characteristics and flights are available. The Chophouse had four beers on tap, the Highland Gaelic Ale and Oatmeal Porter as well as Sierra Nevada Pale Ale and Samuel Adams, though they were out of the latter the night we were there. They also offered three more Highland in bottles, the St There’s Pale Ale, Kashmir IPA, and Mocha Stout. Other bottles include Duck Rabbit Amber, Anchor Steam, Samuel Smith’s Nut Brown, Carolina Blonde and several macros. I enjoyed my first Highland Kashmir IPA and JB started the evening with the Oatmeal Porter. Vic and Sarah joined us and we headed out. 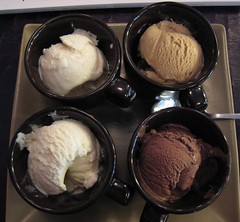 Sarah and I opted to return to French Broad Chocolate Lounge while JB and Vic went on to Barley’s. Sarah and I both picked out truffles to take home then I enjoyed a flight of Ultimate Ice Cream: pure dark chocolate, vanilla, mocha stout & peppermint while Sarah settled in with a cinnamon/cayenne hot chocolate. Then we were on to Barley’s for craft beer and bluegrass. I sipped on a small pour of Duck Rabbit Amber, JB the Catawba Valley Cream Ale, Sarah the Catawba Valley Blackwater Uber Pale Ale, and Vic the just-up Highlan 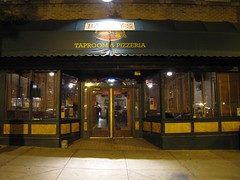 d Shining Rock Lager while we enjoyed some great music by the Drover’s Old-Time Medicine Show. Although we didn’t get a pie, Barley’s offers a beer mash dough pizza made with spent grain from local breweries, cool. We finished downstairs and headed upstairs as Vic had a craving for the French Broad Imperial Porter. I was the odd man out ordering the Foothills Hoppyum IPA but had only had the randallized version at the fest, turns out it’s quite a nice beer as is.