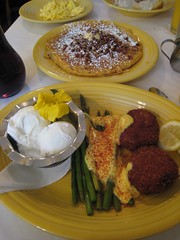 We ate an utterly delicious breakfast at Tupelo Honey Café. The sweet potato pancake with pecans is quite possibly the best pancake I have ever tasted, not to mention the delish crab cakes and biscuits. I noticed several local craft bottles in the cooler on the way out and with breakfast served all day, I’ll be back for sweet potato pancake and some Highland next time I’m in town. We stopped by the Greenlife Grocery on the way out of town

for some local cheese, coffee, and some of the Lusty Monk mustard I had developed a craving for. I was quite impressed with the wall of beer located in the back right corner, several locals for offer as well as a diverse selection of craft and imports. 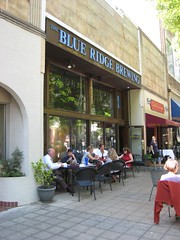 On the road to South Carolina, we stopped for the quintessential roadside boiled peanuts to tide us over. We found Blue Ridge Brewing Company on Main Street in the recently revitalized downtown Greenville. We bellied up to the bar and ordered a sampler, containing five beers: Kurli Blonde Ale, Colonel Paris Pale Ale, Hurricane Hefeweizen, Rainbow Trout ESB, and the XXX Total Eclipse Stout. They were unfortunately out of their IPA. My favorites were the Blonde, light but with bittering balance, and the ESB, malty, light diacetyl which was complimentary, bittering midway and remaining. The Hefe improved as it warmed, showing more banana and clove character, as well as some bright citrus, quite a refreshing drink. The very cool pottery face jug club mugs made by a local artist are displayed on a shelf behind the bar. The brewing equipment is located in the front window, the long copper-topped bar is to the left of the deep rectangular room while wood booths and tables are on the

right. I found it a pleasant atmosphere, although the rustic theme seemed a bit forced with the faux cabin façade on the back wall. We wandered down to Falls Park, enjoying the beautiful weather. We didn’t hit any other bars, but I noted that Greenville has a Barley’s and a Mellow Mushroom within easy walking distance of the brewpub, could make for a good crawl. 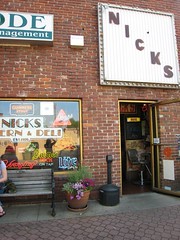 We decided to take a slight detour to Clemson, SC for dinner and, hopefully, more local beer. After stopping to pick up a wedge of Clemson Blue cheese at the student center, we scored at Nick’s Tavern and Deli. It’s a pretty small joint, with a zig-zag shaped bar with twenty plus padded backless stool on the left and worn wood booths on the right. Walls packed with breweriana, a variety of flags tacked on the ceiling and a large collection of bottles displayed on shelves behind the bar give the college-town bar an underground bohemian feel. Nick’s offers sixteen taps, three which were local, two Foothills and one Terrapin, all were craft, and 56+ bottles, a mix of craft, imports, and a couple of macros, i

nteresting diversity. I chose the Foothill’s Torch Pilsner, JB the Foothill’s People’s Porter and we split an order of Cajun pimiento cheese with pretzels, which was quite tasty. The bottles are listed on tabletop acrylic table stands as well as by labels grouped by price on a chalkboard above the bar, a cool visual. Nick’s is a sanctuary for out-of-towners in Tiger territory and quite a cool little bar, well worth the short detour off I-85. 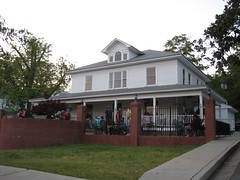 We pulled into Clemson’s Mellow Mushroom for pizza and the prospect of South Carolina beers. Located in a large white house, the interior is decorated in orange and blue Clemson colors. The second floor has been cut out, so each room is two stories high, interestingly, a ledge was left in each room and furniture is perched here and in the corners and the walls above are decorated giving the place a slightly surreal feel. We sat out front at a high iron patio-style table, more tables are located on the large wrap-around 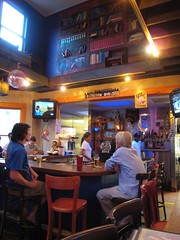 porch. I ordered RJ Rocker’s Bell Ringer IPA, JB the Rocker’s Homegrown Honey, satisfying our quench for more SC-brewed beer. The Homegrown is an amber ale brewed with honey and showed a biscuity maltiness, with a touch of honey sweetness, bitterness near the swallow, balancing nicely, an easy but flavorful drink. The Bell Ringer is a double IPA and was served quite cold, but displayed a nice balanced maltiness, hints of tropical fruit and a big body as it warmed. Mellow Mushroom has fourteen taps, about half of which are craft, while the bottle selection is rubbish. The pizza was decent and Mellow Mushroom is a worthy stop if you’re wandering through Clemson in search of South Carolina beer.

Back on the road to my parent’s house in Atlanta, where I had a Sweetwater 420 as a nightcap.