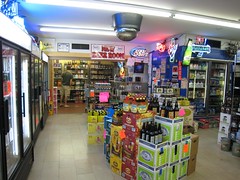 I spent the afternoon taking a jewelry-making workshop at Ornamentea in Raleigh, then we headed to Durham for the evening. We started out at Sam’s Quik Shop, a fantastic bottle shop in Durham. Although it looks like a typical convenience store from the outside, the inside is a world of wonder for craft beer lovers. Sam’s carries a superb selection of local beers, as well as American craft and imported; the Belgian selection was quite impressive. I picked up some North Carolina brews and a few other beers I don’t see in NYC and am looking forward to sharing with friends when I get home. Sam’s Quik Shop is a must stop for craft beer bottles when in the Raleigh-Durham area! 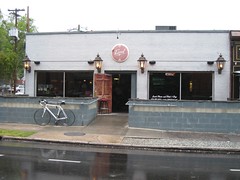 Our next destination was the Federal, a cool little bar & restaurant in downtown Durham. With dark red walls, breweriana on the walls, and concrete floors, I found the Federal to have instant appeal, a very chill place. There’s a zigzag shaped wood bar with fourteen padded backed chairs, a back room with seating, and outside seating in the front overlooking Main Street. They have sixteen taps, three of which were North Carolina brews, the rest almost all craft. The beers are listed on a chalkboard behind the bar and the tap handles are all vintage, mostly defunct breweries (Blatz, Ruppert, etc). They also carry 26 bottles, a mix of macros, imports, and old time regionals (Iron City, Ge 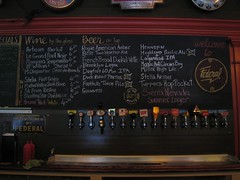 nessee Cream, Utica Club). We sat at the bar, I ordered a half pint of the Foothills Torch Pils, JB the Duck Rabbit Porter, Sarah the French Broad Dunkel Witte, and Vic a Lagunitas. We were pretty hungry and ordered some snacks to share – the cheese & charcuterie plate and the special scrambled eggs, leeks, proscuitto, gruyere, and garlic mayo on grilled sourdough with fries, an excellent sandwich. I finished with a French Broad Dunkel Witte for myself, all of the North Carolina beers were lovely. I found the Dunkel not what I expected, but a delicious beer, with cocoa aroma and flavor. With a solid beer list, tasty food, and laid-back atmosphere, this is another bar I could spend some time in. 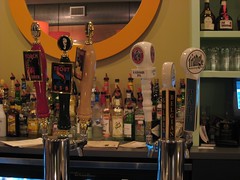 We moved on to Watts Grocery for dinner. At once both casual and upscale, Watts is a restaurant featuring local foods prepared in a forward Southern fashion. They also feature local beer – six taps: Foothills’ Torch Pilsner, Trout ESB & Hurricane Heifeweizen, Highland’s Kashmir IPA, and Triangles’ Pale & Golden Belgian. I ordered the delicious Triangle Golden Belgian, one of my favorite beers from Saturday’s fest. We opted to go tapas style and ordered four appetizers and a side to split: the farmer’s market cheese plate, strawberry salad with Elodie Farm’s fresh goat cheese and spring onions in a Dijon vinaigrette, spring asparagus, garlic, and mushroom hash topped with a Fowl Attitude poached egg, Fried Louisiana frogs’ legs with a jalapeño pan sauce served on a crispy grit cake, and the horseradish mashed potatoes. Everything was absolutely delicious and we finished by splitting a slice of the amazing coconut cake. For fantastic local food and beer in a refined and relaxed setting, Watts Grocery is the place to go in Durham, highly recommended!

We ended the evening at Tyler’s Restaurant & Taproom. Tyler’s is Sarah’s regular hang and had come highly recommended by my parents. I was not disappointed. Located in the American Tobacco Historic District, I was impressed from the moment I walked in the door. It was pretty empty on a Sunday night and the large room with exposed brick and ducts, high ceilings, and lots of wood was well-lit and welcoming. We sat at the long wood bar and ogled the taps. With fifty taps in the main space and an additional ten in the Speakeasy room next door, Tyler’s has quite the selection. A nice mix of local, American crafts, and imports, Tyler’s has something for everyone. They also offer a number of well-thought out flights. I started with a Big Boss

Surrender Monkey, JB had the French Broad Wee Heavier, a bottle of ’05 Anchor Old Foghorn for Vic, and an Allagash Black for Sarah. The main room closes at 10 on Sundays, so we moved over to the Speakeasy next door. A large room with exposed brick, high ceilings and pool tables, the Speakeasy is darker and cozier than the main area. Many of the same beers are offered on draft on this side as well as an additional 10 taps. I drank a half pour of an Imperial IPA which I did not write down, unfortunately, although it was delicious and the perfect night cap. Tyler’s is another great Durham beer destination, one I could easily see myself spending some time in if I lived here.