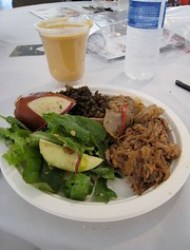 Twenty minutes of yoga on Vic’s back deck got my day off to a great start. We walked down to Moore Square for the World Beer Festival, arriving a little after noon. It was a beautiful day, around 80° and sunny, an easy entrance for VIP ticket holders (yeah, I splurged). We had a few tastes, Duck Rabbit being the most notable, and were off to the VIP tent to get some lunch. VIP tickets included entrance to the VIP tent with “special beers” and music, air-conditioned bathrooms with running water, a plate of food, and a commemorative nonic pint glass. Was it worth it? Yeah, in my opinion, I enjoyed the bottled water, clean bathrooms and being able to wash my hands afterward, the food was phenomenal, and not having to wait in line to get in was a bonus. Plus, there were some great beers that I only saw in the VIP tent: Firestone Double Barrel Ale, Lost Abbey Serpentine Stout, Oskar Blues Ten Fidy, and Saranac Imperial Stout. What’d we eat? Durham Catering prepared the food, which, as I mentioned, was absolutely delicious. I loaded my plate with garlic, cheddar & Stone Ruination IPA soup, salad of celery hearts, pancetta, tart apples, 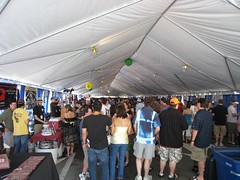 hazelnuts, & blue cheese, Troeg’s Troegenator braised pork shoulder, grilled brautwurst with Brezel rolls, peppers, onions & country mustard, spicy lentil salad, & Deschutes Obsidian Stout chocolate tiramisu. My favorite was the braised pork shoulder, YUM! After filling up and hydrating, we headed back out to the beer tents. I focused solely on North Carolina and regional beers that I don’t see in NYC. I tasted beer from these breweries:

My favorite breweries were Foothills Brewing with their Hoppyum IPA randallized through Cascade hops, Triangle Brewing Company with their White Ale and Belgian Golden Ale, and Outer Banks Brewings’ Lemongrass Wheat and Compass Rose. The Compass Rose was my favorite beer of the fest – a Belgian Brown Ale spiced with rosemary! I absolutely love rosemary and this beer was pure pleasure to drink. 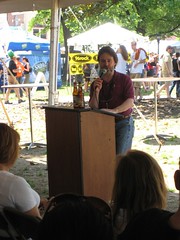 I briefly checked out Gregg Glaser’s “Brews in the News” talk at 1:00 and sat in on Julie Bradford’s “Pairing Beer and Chocolate” at 3:00. These were both lively and informative and well-attended, always nice at a large festival like this one.

This is a great beer festival, one of my favorites that I have attended in the last couple of years. The pros:

The only con was not enough pour buckets and rinse water. There were carboys of water at entrances to the tents but these ran out quickly, a few of the breweries offered water but not many. This would be an easy fix for the festival organizers. 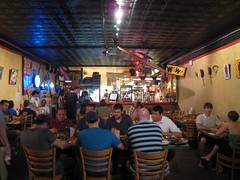 We chilled on the back deck for the afternoon and then headed to Lilly’s Pizza. The beer list is small, but has some solid local offerings, I opted for a Highland Gaelic, JB went with the Duck Rabbit Milk Stout. I ordered the Pigs in a Blanket to share, a small house salad, and the Big Star pizza, with pesto, mozzarella, parmesan, gorgonzola, fontina, roasted red peppers, & pistachios, all were very tasty. The leftovers will be consume shortly. Lilly’s is a super place, very eclectic atmosphere with local art and an assortment of vintage signs and other interesting stuff to gaze out while you’re waiting for your pies. Another fantastic end to a fun and fulfilling day!