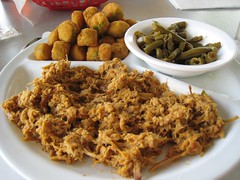 Up by nine, a run on the treadmill, then blogged Day 1, got to keep some balance on these beer trips. We were on the road by noon, stopping at the Dairy Freeze in McKenney for a snack. A late lunch was had at Nunnery Freeman Barbecue in Henderson, NC. No beer, but extremely tasty barbecue plates, with complimentary hush puppies to start. The green beans were delish a 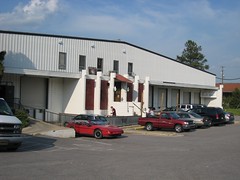 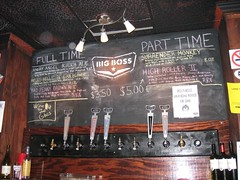 American IPA. I tried all of the beers as the bartender was generous with samples and all were good – interesting, clean, and appealing. I settled on a pint of Surrender Monkey, which is brewed with coriander and pepper, a smooth 8%, enjoyable brew. JB loved the Bad Penny enough to have two pints. Horniblow’s is a cool place, with a warren of upstairs rooms with comfy couches, a pool table, ping pong table, dart board, and board and arcade games. Beer bottles line the top of almost every room. Located in an industrial area, i has that feel and I found it to be a laid-back, comfortable place. Al

though they don’t offer sampler flights, they pour pitchers and growler fills and sell 6-packs of the Hell’s Belle and Bad Penny. They have casks about twice a month and the most recent one lasted only 29 minutes, nice. Good schwag, too, I picked up a tee for myself and a pint glass for my Dad. Sirius 74 Blues was playing and I was one happy beer-drinking girl. 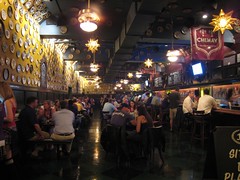 We headed over to Vic’s, our home base while in Raleigh, and chilled for a bit. But craft beer was calling and we headed to the Flying Saucer for the pre-fest brewer’s party. I left JB & Vic on the patio and headed into the very crowded party. I met Julie Bradford, editor for All About Beer magazine, sponsor of the World Beer Festival that we would be attending on Saturday. She introduced me to her husband, Dan, publisher of the magazine. I spent most of the party talking to my friend Gregg Glaser, news editor of AAB. I enjoyed a pint of the Carolina Spring Bock, a nice Maibock rendition, follow 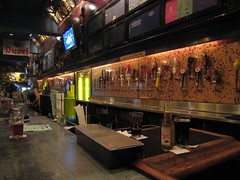 ed by a Ham’s Pale Ale. Although I didn’t hang out inside, the Flying Saucer is an appealing place, the walls and ceiling lined with various plates as in the other Flying Saucers. The patio has picnic table seating and is a big draw in warm weather. I found the Beer Goddess tank tops and microskirts on the waitresses distasteful (exploitative, let’s be honest), but the guys disagreed, naturally. But the immense tap and bottle selection would bring me back next time I’m in town. 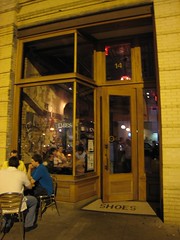 We headed a few blocks over to The Raleigh Times for a late dinner. A very hip place, although a bit overdone in my opinion, the carefully peeled walls displaying different surfaces protected by sheets of plexiglass. Very appealing, though, the restaurant/bar is named for the defunct newspaper’s building where it is located. Old copies are tastefully displayed throughout the space. 80+ bottles and six taps are on offer, that night 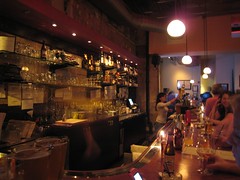