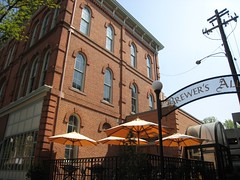 On the road, day one of an eleven day journey, seeking the best local craft beer, art, food, and music. We left Harrisburg at 10 am and headed down to Frederick, Maryland for our first stop, lunch at Brewer’s Alley, arriving ten minutes before they opened at 11:30. We opted to sit at the bar, I ordered the sampler and JB the cask Trinity Stout. Brewer’s Alley serves six beers on tap: a kolsch, IPA, Oatmeal Stout, Pils, Nut Brown Ale and Dunkel Weizen. The IPA was my favorite, although more like a pale ale in character, it had a delightful citrus aroma and flavor and was nicely balanced. The

oatmeal stout and kolsch tied for second, the former displaying a roasty character and good balance between sweet and bitter flavors and the latter lightly fruity with clean grainy maltiness and a pleasant hops presence. I recommended the kolsch to Mary Kay, who is experiencing a burgeoning appreciation of craft beer, and she loved it. My six-beer 5 ounce sampler was $7.08 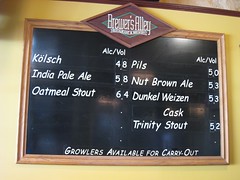 I’ll admit, I was expecting more interior personality being in the historic downtown of Frederick, but Brewer’s Alley is a swell place – worn wood floors, mustard colored walls, high ceilings, and exposed brick behind the brewing equipment, which is separated from the bar area by glass etched with 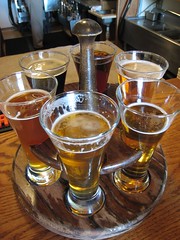 hop plants, a very cool touch. The u-shaped wood bar seats at least fourteen, with tables and chairs around. There’s a medium-sized dining room off to one side as well as a small front deck that overlooks Market Street.

My buffalo catfish po’boy special was quite tasty and JB declared the Smokehouse burger, a burger topped with applewood-smoked bacon and pulled pork, extremely good, while Mary Kay found the broccoli and cheese soup delicious. The Brewer’s Alley has a pleasant atmosphere and flavorsome food and beers, check it out next time you’re in Frederick, Maryland!

Almost two hours later we pulled into Legend Brewing Company, just south of the James River and downtown Richmond. The spacious deck was calling and we took a seat at one of the many iron patio tables available. Six regular and five seasonal draft beers were on offer. I ordered a sampler of each and we relaxed and enjoyed the beautiful sprin

g weather. The year-round beers are a lager, pilsner, brown, golden, pale ale and porter, the current seasonals a Vienna Lager, Hefeweizen, Maibock, Doppelbock, and Imperial Brown. The lager was my favorite of the year-rounds, a very clean easy drink. The pilsner and brown were also tasty. The seasonals were where it was at, though; the Maibock was delish, with a lightly sweet grainy nose and flavor and a hint of honey on the tongue. The Imperial Brown and Doppelbock were very drinkable, the brown

having a lot of depth, raisin/molasses and a good amount of hop bitterness to balance and the doppelbock very easy-drinking, a clean, toasty-sweet beer. We split a Munich Platter, which included a bratwurst, soft pretzel, and Gruyere cheese, the perfect late afternoon snack. The deck is the draw here, with at least 27 tables and a scenic view of downtown Richmond, the perfect place to

spend a 79º breezy Spring afternoon. The inside seems cool, too, with a beer hall feeling – lots of light-colored wood, high ceilings, and a spacious feeling. Classic rock was playing, adding to the laid-back atmosphere. Legends is located in a former machine shop in an industrial-type area. If I lived in Richmond, I’d be hanging out on the deck sipping a Maibock or a lager many an afternoon. 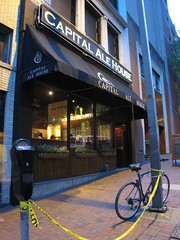 After checking into the hotel and some freshening up, we walked two blocks to Capital Ale House for dinner. We sat ourselves at the impressively long L-shaped wood bar stretched along the left side. I’d first heard about this bar from my parents, who were awed by the ice strip that runs along the length of the bar to keep your drinks cool. This was not a selling point for me and I didn’t find it very effective at keeping my water cool, b 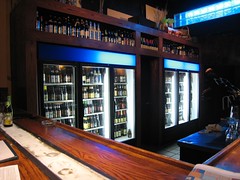 ut it’s a draw for many. An inviting atmosphere, the deep room has lots of wood – wainscoting, trim above the bar, and the booths lining the right side. Historic prints add a nice touch. JB ordered the Blue Grass Jefferson Reserve Imperial Stout from Kentucky, at 10.5%, a deliciously smooth, complex example of the style 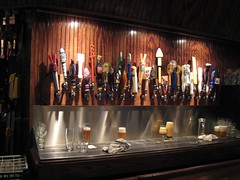 . I opted for a bottle of the St George Brewing Company Spring Lager, a Vienna-style lager that was quite pleasurable, clean with a lot of malty flavor. I started with a house salad with a savory dill-blue cheese dressing and followed with the smoked gouda-bacon mussels – light yet hearty and very satisfying. JB devoured his sausage-stuffed pretzel sandwich. Capital Ale House has 2 cask ales and JB opted for on 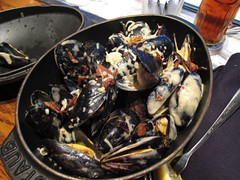 e of these for his second. I was remiss in writing it down, but it was a delicious IPA from a Virginia brewery. Capital Ale House has 46 taps total, between the main bar and the downstairs game room and around 250 bottles. Great live music was playing the in the side room while we were there and drawing a lot of people in. The place can get a little noisy and smoky, but with the classy yet comfortable atmosphere, terrific beer selection, and delightful food, this is a must on any visit to Richmond. 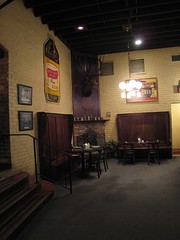 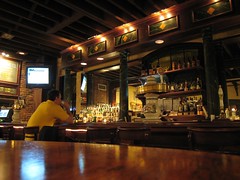 I was pretty beat at this point, but we forged on to Richbrau Brewing Company, an easy walk from Capital Ale House. This was the coolest space – with an exposed wood rafter ceiling, lots of exposed brick, a metal-topped wood bar, old-fashioned tall windows, and interesting beer memorabilia on the walls. 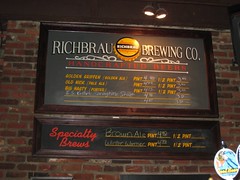 My palette wasn’t the best by now, but I wasn’t impressed with either the golden or the pale. The E.S. Kelly’s Springtime Stout was a solid drink, as well as the Winter Warmer on tap. The cask Winter Warmer had gone south, tasting more like a sour fruit ale than the nice malty beer that we had just had. JB finished with a pint of the house root beer, a delectable drink. Overall, worth the stop, but be sure to ask for samples before you order your pint.